A pair of waterfalls for waterfall Wednesday – the first is on an unnamed stream right next to Glacier Creek road (📷 by Maria) the second is a lovely cascade on Grouse Creek. Of course, the PNW is one big waterfall today…

A pair of waterfalls for #waterfallwednesday – the first is on an unnamed stream right next to Glacier Creek road (📷 by @_bcmaria_) the second is a lovely cascade on Grouse Creek. Of course, the PNW is one big waterfall today… #waterfalls #mountbakersnoqualmienationalforest #heliotroperidge #hiking #mountbaker

The day on which I posted the above photos started out very wet. It seemed that the November rains had finally rolled in, albeit only for a couple of days as it turned out.

On our way up to Heliotrope Ridge we passed a number of pretty roadside waterfalls, small cascades from meltwater streams from high up. On our way back down we stopped long enough at the first one for me to hand my phone to Maria to grab the shot. Although it was getting dark I knew the phone app would be able to handle it with its stacking of images, and I think it turned out quite nicely.

The second photo was taken a few minutes into our hike, from a bridge over Grouse Creek. For this I used the SLR (since I was carrying it) and managed to hand-hold a shot with an exposure long enough to blur the water in a pleasing but not-too-artificial way.

I used to like the really long exposure photos of waterfalls but after watching a couple of Adam Gibbs’ videos on waterfall photography, I’ve changed my mind. His technique is often to blend two exposures – one long, one short – in order to preserve some details in the flow against a smooth backdrop. I can’t be bothered to do that so I’m making do with a single “Goldilocks” exposure that’s just right. At least for my taste.

Sunset light on the summit of Mount Baker, a view through a gap in the trees along the road – no hiking needed!

Sunset light on the summit of Mount Baker, a view through a gap in the trees along the road – no hiking needed! #mountainmonday #mountaincrushmonday #mountbaker #kulshan #mountbakerwilderness #snoqualmienationalforest #sunset #hiking #ifttt

After a hike to Heliotrope Ridge that yielded stunning views of the Coleman Glacier carving its way down the north-western slopes of Mount Baker, I had no expectations of seeing something as photo-worthy. And yet as we drove away from the parking lot, a gap in the trees opened up to reveal an uninterrupted view straight up to the summit, illuminated from the side by the last warm light of the afternoon.

We dashed off a handful of photos using the telephoto lens, alternating between ISO 400 and 800 to ensure reasonable shutter speeds to work around the iffy image stabilization (I’ve learned the hard way that it’s better to get a sharp noisy image than a blurry clean one). It’s rare, but sometimes I do pre-visualize a particular crop when I size up a scene. In this case, I felt an Instagram-friendly square crop would easily work with the shape of the summit, the amount of light and shadow, and the wall of snow-specked rock angling down and sweeping to the left.

That’s not to say that the original aspect ratio was not a pleasing photo: the (nearly) full image is up on our Flickr account: 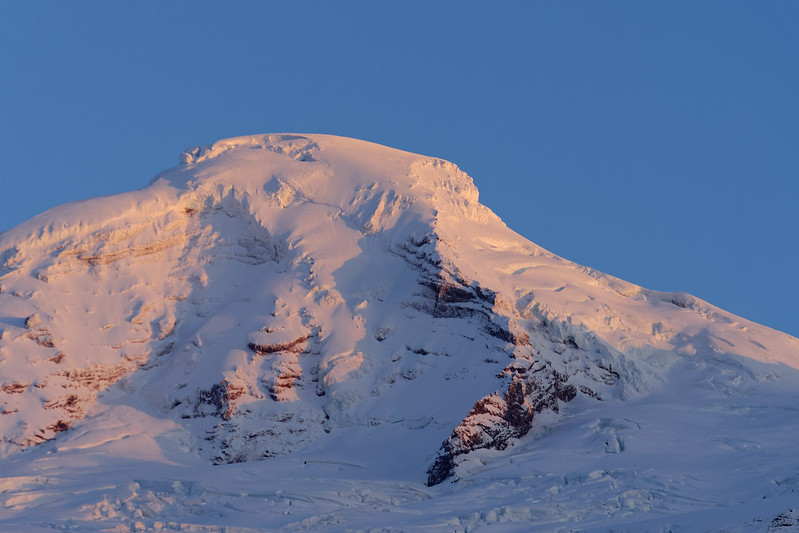 Sometimes multiple images can be had from a single photo and I’ve had a few instances where I can’t decide which crop or processing settings I prefer. One way of approaching the decision is to to decide which story I want the picture to tell. As one of the photographers I follow on YouTube says, make the picture about something, rather than of something.

But it’s fine (and indeed probably desirable) to create all those different images and let them gel for a while to see which one has lasting appeal. In some cases the answer is all of them, and in others it’s none!

For this photo, I don’t yet know. I still like them both.

Watching Free Solo last night had me in awe of Alex Honnold’s achievement and reminded me of just how impressive and beautiful the Yosemite Valley is to see in person. We’ve visited just once, way back in May 2003 and this photo was taken from one of the many pullouts on the road. If you enjoy spending time in the mountains, I highly recommend checking out the film on the big screen while you can!

Watching Free Solo last night had me in awe of Alex Honnold's achievement and reminded me of just how impressive and beautiful the Yosemite Valley is to see in person. We've visited just once, way back in May 2003 and this photo was taken from one of the many pullouts on the road. If you enjoy spending time in the mountains, I highly recommend checking out the film on the big screen while you can! #mountainmonday #elcapitan #yosemite #yosemitenationalpark #freesolofilm #freesolo #ifttt #nps

The movie Free Solo is about Alex Honnold’s unroped climb of El Capitan. I’m not a climber and I spent most of the film wiping my palms, wishing I had a climber’s chalk bag myself. But I love the mountains, and Yosemite is a wonderful place, and I’m fascinated enough by climbing and mountaineering to want to watch this film. And I’m glad I did.

We took the photo above with our first digital camera on our one and (so far) only visit to Yosemite. It was a real treat to marvel at the famous rock formations of El Capitan and Half Dome with our own eyes, and to spend a couple of days exploring the park, even in the rain. On the plus side, the waterfalls – Yosemite, Vernal, and Nevada – were spectacular.

On a soggy day at the beginning of November it’s nice to be able to look back at those sunnier days on summer trips. Our backpacking trip to the Southern Chilcotins was the highlight of our summer, especially this day up on Harris Ridge – even though we got chased off by a thunderstorm that chucked hail pellets and snow at us for an hour!

On a soggy day at the beginning of November it's nice to be able to look back at those sunnier days on summer trips. Our backpacking trip to the Southern Chilcotins was the highlight of our summer, especially this day up on Harris Ridge – even though we got chased off by a thunderstorm that chucked hail pellets and snow at us for an hour! #throwbackthursday #backpacking #hiking #southernchilcotins #southchilcotinmountainsprovincialpark #explorebc #yourbcparks #bcparks #beautifulbc #beautifulbritishcolumbia #backpackingbc #bchiking #ifttt #wedothisforfun #vacation2018 #summerholidays

It’s been pretty wet over the past few days; it feels like autumn has finally caught up with us as the first hints of snow are decorating the tips of the North Shore mountains. Summer seemed to come and go quickly this year but we did get out on some memorable trips, not least of all our week in the Southern Chilcotins.

While we enjoyed travelling through the landscape, it’s our two days of day-hiking that stand out as our favourites, and especially the second of those days on which we hiked up and along Harris Ridge.

After a bit of hard work we ended up on the broad expanse of the ridge, walked to its end, and sat down for an early lunch with the view above. The sun came and went, and we waited as long as we dared to get this shot as the storm clouds rolled in our direction.

This view was one of our favourites as we looked down into the meadow where we’d camped for two nights – the same meadow we watched a grizzly bear patrol while we cleaned up after breakfast – and up to Windy Pass with its endless views to the west. It’s possible to gain the ridge from those meadows although it looks quite steep from down there.

We tried to outrun the weather but it caught up with us as we began our descent back to the tent, pelting us with hail that turned the landscape white for a time. As I said, a memorable trip…!