Oh the mayhem you can cause if you’re an eagle – a lone bald eagle stirs the entire flock of snow geese into flight, only a small portion of which can be seen here.

Oh the mayhem you can cause if you're an eagle – a lone bald eagle stirs the entire flock of snow geese into flight, only a small portion of which can be seen here #featheredfriday #snowgeese #baldeagle #reifelbirdsanctuary #georgecreifelbirdsanctuary #westhamisland #beautifulbc #beautifulbritishcolumbia #salishsea #ifttt #blackandwhite #bnw

You never know what’s going to get a reaction on Instagram. I was sifting through some photos looking for inspiration for an Instagram post to fit in with one of the Friday hashtag themes, such as forest Friday, feathered Friday, or flashback Friday (among others). This one caught my eye because I’d recently watched a video on YouTube from a photographer I follow that talked about taking photos that told a story. As I looked at this photo, I immediately saw the story: the lone eagle and the flock of snow geese in flight, the predator-prey relationship, and the sense of movement from left to right.

But even better, to my eye, were the layers: the reeds at the bottom of the frame, the line of the ocean, the birds in flight, the clouds, and finally the eagle in clear sky; all separate, all contributing to the simplicity of the photo. (If I’m picky, there are too many layers, so the photo ends up quite busy, but I think it still works.) I found a square crop I liked, tweaked the exposure and contrast and posted it on Instagram.

I expected maybe two dozen likes at most – it’s a bit of a departure from my usual photos and it lacks a strong subject – but it’s had over twice that many. However, what surprised me more were the comments – it seemed that it really resonated with some folks, far more than I thought it would, which is both humbling and gratifying. It also makes me want to change up my photography style to find more scenes that tell a compelling story, rather than my usual approach of taking many photos to document as much of the story as possible.

However, it was only in the post-processing that I noticed there was even a story to be had. At the time I was just taking lots of photographs of distant birds, hoping they’d be in focus! Recognizing the story at the time will take more application, and I think I might be ready for it. 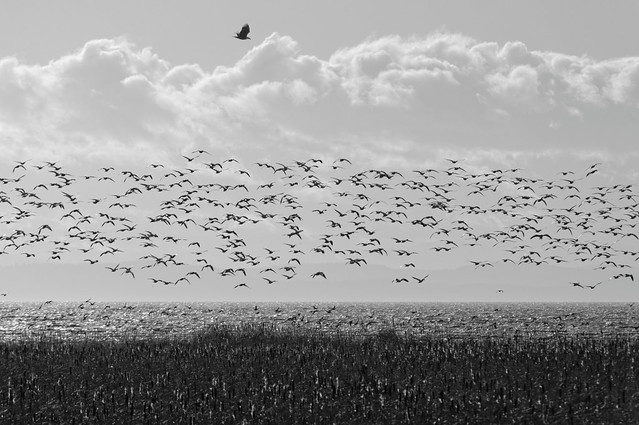