A pleasant Monday evening and I fancied a walk on the beach. Again. I headed for Kits Beach mostly to see for myself the efforts to free a small boat that had blown ashore in a recent storm. The Tuesday Sunrise was indeed still high-and-dry and half a dozen people were digging out a trench on the beach to enable water to flow around the boat at the next high tide. 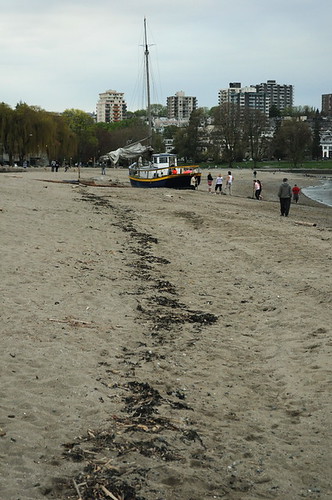 I felt a bit self-conscious taking photos while they were working so hard (I’m not a great people photographer) so I wandered off down the beach a little further before heading over towards the Maritime Museum. I normally avoid the dog beach but tonight I walked along it, having watched the antics of dogs and owners from up on the path. One dog took exception to me and barked from close quarters. I did my best to ignore it and kept walking, which seemed to work. I spotted a seal about 30 metres off shore and climbed the rocks up onto the path hoping for a better view. I passed the time watching the cormorants zip by close to the water, and soon gave up on the seal.

I walked to the end of the point and watched a pair of cormorants fishing. A heron flew over, squawked and landed on a nearby pile at the small marina (with the little Viking longship). Movement in the water caught my eye, and I watched a dark drown shape swim towards me. An otter! It lifted its head above the water, spotted me, and turned to head over to the dock. I snapped a couple of photos but the low light and movement made them blurry. But it was a treat seeing it at all.

With the daylight fading, I figured it was time to head back home. Walking round to the other side of the marina I saw a dark shape on the shore. Could it be? Yes – it was the otter, and it was feeding. I moved slowly along the path until I was alongside, the otter no more than 10 metres away. I took a few more photos and a minute or so of video. I reviewed what I’d taken and wondered if I could get closer. I moved round the corner onto the grass and crept towards the edge of the bank. I peered down over the rocks and there not more than 5 m away was the otter and the sizeable fish it was feasting on. 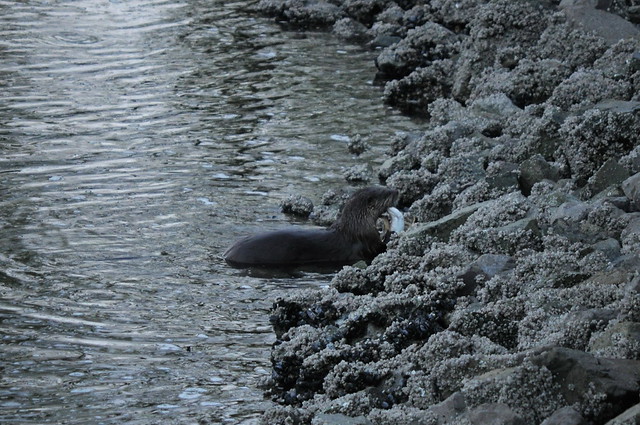 I took as many photos as I could, and more video. Chomp, chomp, crunch, crunch – I worry about encountering fish bones, but the otter had no such problem devouring the whole lot. Head, tail and everything in between. We locked eyes for a moment, then it turned and swam off. I looked up and saw the city, and thought how amazing it is to live in such a place.

In search of fresh air and a place to stretch our legs, we headed to Lighthouse Park. We don’t go there too often so it makes a nice change to visit once or twice a year. On our way we were pelted with hail as a vicious little squall blew through West Vancouver, blowing litter, leaves and small branches everywhere. By the time we reached the park it had died down. We took a trail on the west side of the park and wandered down towards the lighthouse. Along the way I steered us down a dead end where we ended up on a rock with a great view out to sea. Well, on a nice day anyway. All we could see was a huge ominously-dark cloud over towards Vancouver Island, undoubtedly heading our way. Maria saw an impressive fork of lightning and we decided we should continue our loop and return to the car.

We stopped to admire some spring trillium and had taken one photo when we heard this deep booming “hoo-hoo-hoo-hoo”. We turned round and saw a large bird fly overhead, turn and land in a tree not too far away. An owl! Not any old owl, either, but a big barred owl. I fumbled a quick lens change, increased the ISO setting to 3200, and grabbed a few photos through the trees. Not too great really, but we walked around a bit and found a clear sightline to the owl, less than 10 m away. I took a deep breath and fired off as many shots as possible. To our amazement it stayed put for a minute or more, bobbing its head this way and that, looking and listening for prey. A few times it looked straight at us with those unsettling deep black pools of eyes (honestly, we’re way too big to eat!). We looked away for a second and when we looked back it had gone, without a sound. What a treat! 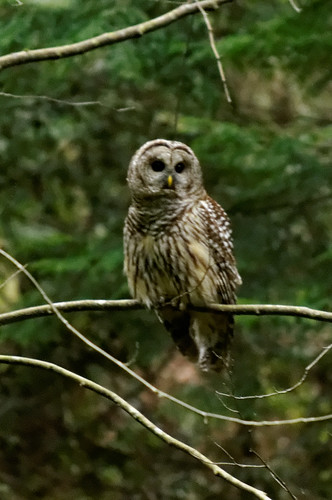 Five minutes later we were back at the car, just as the next squall arrived and threw everything it had at us. Welcome to April.