A mild evening down by the water near the Jericho Sailing Club, between Locarno and Jericho Beach. I was hoping for some rich sunset colours to capture over the water but it was too cloudy. I walked out onto the pier and decided to take some long-exposure photos of the Vancouver skyline. A seal bobbed up every now and then.

There’s a short period of time around dusk when even cloudy skies look very blue (at least to the camera) and it’s possible to get photos with an interesting white balance. In this case I let the camera decide the white balance, which meant the city lights came out quite nice and white while the sea and the sky became a deep blue. 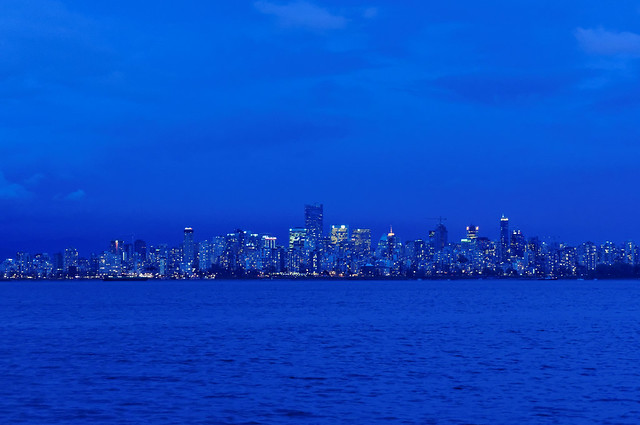 I spent a few more minutes taking longer and longer exposures of the city until the sky lost all its blue. The low clouds glowed orangey-pink with the reflected city lights and the skyline became a mass of light. Despite the cool breeze, the water was smoothed out by the long exposure, making for quite a nice effect.

Now that it was properly dark, the air was quite chilly and it was time for me to head home. My short walk back to the car was accompanied by a chorus of frog song from the marshes.